skip to main | skip to sidebar

RAGBRAI 2012 was most definitely the DAWG days of summer!  Temperatures hovering around 100 at the beginning of the week made it one of the most challenging years ever, and demanded a good balance between hydration and "other" forms of drinking!  Nevertheless, the spirit of RAGBRAI is not easily deflated, and riders still seemed to enjoy themselves along the way.  Here's a brief recap of the week for those of you who missed it, or those of you wanting to relive a little of it.  I've included the high temperatures recorded by one rider on the RAGBRAI forum.  They are unofficial, but don't sound that far off.  (To quote Team Spin... "It's not the heat, it's the stupidity!)


Day 1 - Sioux Center to Cherokee - 54.4 miles, 102 degrees
It's always a little disappointing to start the ride without the official Missouri River dip, but still exciting to get on the road the first day!  Our first stop was at Tag's in Alton - an awesome first stop! Tag and Joanie couldn't have been nicer, and their stop was super organized, super friendly, and super fun.  But beware the JELL-O shots - they packed a punch!  Thanks, Tag & Joanie, for a great time!


Next stop was the Dugout Lounge in Granville.  They had live entertainment in the beer garden (sorry I can't remember the name to give credit!), and the Vodka-Lemonades were mighty refreshing (can't drink Bloodys all day)!  Another great stop, only dampened by Mark's first flat tire of the week as we were leaving the party.


A quick stop in Marcus at a cousin's home provided some welcome relief from the heat and a chance to rehydrate before the last stretch into Cherokee.  Thanks, Bob & Cindy Gannon, for your wonderful hospitality!

Jobie's in Cherokee was a welcome sight, and a great stop, bordering the beer garden and main stage for the evening's entertainment.  We met some new friends there before heading out to the Grainery Lodge, a barn converted to lodging about 7 miles out of town.  About 30 people stayed there for the night, and were treated to live music by Jason Walsmith of the Nadas.


Day 2 - Cherokee to Lake View - 62 miles, 109 degrees
The best laid plans of mice and men... we had the best intentions of starting early and getting 40 miles or so in before stopping to indulge.  And start early we did, but then stopped at Jake's in Aurelia, and dawggone it, it's just hard to leave a good party!  We kicked off the day with a Bloody Mary with Team Draught, Team Gnarley, Team Spin, Team Good Beer, and the Regulators.  And then another.  And maybe another.


We finally pulled ourselves away.  After a quick refueling stop in Hanover Village (awesome pork burgers!), it was on to Lobo's in Schaller, where we got a little waylaid again.  The beer garden provided plenty of shade, and a sprinkler to cool off under.  (Note to self:  Never. Ever. EVER! get bike shorts wet with 30 miles to go on the second day! I'll spare the details)


By the time we got to Sac City, it felt like someone had turned the thermostat up about 20 degrees.  So we stopped into our Dawghouse, Viking Bay, to cool off before hitting the final leg into Lake View.


Our Dawghouse, Glacier Bay, pulled out all the stops, with live entertainment, a rotating menu and a 4 am breakfast the next morning.  And co-owner Mike Busch was gracious enough to let us spend the night in their home (complete with cool rock quarry!).  Thank you, Mike, Emily and Triton, for letting us invade!


Day 3 - Lake View to Webster City - 81.2 miles, 105 degrees
SAGBRAI.  We made it as far as the meeting town (Farnhamville) before calling Papa Giorgio to come pick us up.  Lame.  We weren't even that disappointed when we headed into an American Legion for a TNT, only to find bananas and water, but PLENTY of AC!


Backtrack to Lohrville for a second...we made our daily stop at Mr. Pork Chop, where I had the pleasure and honor of meeting THE Mr. Pork Chop (no offense, Matt.  We love you too, but your dad is the real ladies' man in the family!  What a sweetie!


We sagged the rest of the way to Stanhope (10 miles south of Webster City), where we spent the night with my sister, Marcia "Honah" and brother-in-law Harold "Mayor for Life" Hove.  We stuffed ourselves on Marcia's cooking and went to bed early for a fresh start the next day.


Day 4 - Webster City to Marshalltown - 77.1 miles, 109 degrees
Hometown tour day!!  To give Papa G a chance to experience the ride, I took over driving for the first few legs.  I drove to my hometown, Jewell (a Gem in a Friendly Setting) to meet with a cousin.  Ran into a few old friends there at Axis Lanes, our Dawghouse and a Jewell landmark. 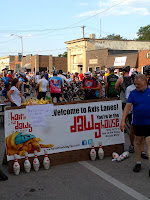 Back in Kamrar, Mark and the rest of the team started the day at Pickles Pub, where they served the "Big Gulp" of Bloody Marys - 24 ounce Hair of the Dawgs, as well as an AMAZING breakfast pizza!


I drove on to Story City to set up a beer stop at my brothers' house for our team and Team Draught.  Thanks, Joe, Tom, and Bella, for letting us stop!  By the time I finished cleaning up there, I just could not talk myself onto my bike, so took a sag to Marshalltown.  After checking in and cleaning up, we headed downtown to wait for the team.  What a relief to see them roll in.  It was HOT, HOT, HOT that day!


Day 5 - Marshalltown to Cedar Rapids - 84.8 miles, 96 degrees
On a normal day, 96 degrees is hot...but this day, it was not!  It's all relative, so with the 13 degree swing and an awesome tailwind, the 91 miles we ultimately logged that day felt WAY better than the 62 we put in Monday!


Mark's rear tire "reared" it's ugly head again, with 2 flats on the short trip into Garwin.  A Bloody Mary, a beer and a pizza later at the Garwin Bull, all was well and we were ready to roll on again.


We didn't stay long, but stopped at our next two Dawghouses, Czech Point in Clutier and the Hitchin' Post in Garrison (the HOTD Margaritas there tasted mighty fine!).  In Vinton we couldn't help stopping at Mickey's Bar - not a Dawghouse, but the place was FULL of Hair of the Dawg jerseys, courtesy of Team Draught, Team Gnarley, and others.  One of the most fun stops of the week, despite being thrown into a baby pool and soaking my *%$!*$ bike shorts again.  Thanks, James Roller!!!


The rest of the ride into Cedar Rapids was uneventful, but scenic.  Happy for Cedar Rapids, after all of their planning for their debut after the 2008 floods, that it had turned out to be such a great day.  We opted out of Counting Crows (I wish those concerts were earlier) for a shower and evening at home in Iowa City with friends Barb & Jan (of 2010 Sagging/Supporting fame), and their team the "Master Race."  Thank you, Barbie & Jan, for a lovely meal and end to our day!


Day 6 - Cedar Rapids to Anamosa - 42.2 miles, 86 degrees
Refreshed from a night at home, we met up with the Bishops at the Chrome Horse, followed by a stop at Parlor City, where Hair of the Dawg was a favorite on the Bloody Mary bar.  The ride out of New Bo started with a cruel and unexpected climb, but we were lucky enough to find Cheese, our favorite Fat Tire friend, at the top of the hill.  We stopped for a quick one with him before moving onto Scorz, our Dawghouse in Mount Vernon.  We thought we had given the Rollers enough of a head start to avoid their "Shot Friday."  Turns out we should have had another with Cheese.  But Scorz was a great party, and it was a short day.


Rumors of off-route parties led us astray, so after a quick stop at Shelly's in Springville, we turned into the NW headwinds into Waubeek, where F.B. & Company had picnic tables and outdoor entertainment set up by the river.  A great, relaxing way to end the day.  Papa G fetched us there to take the Bishops in to their hotel in Anamosa and us back home for one more evening with Barb, Jan and the Master Race.


Day 7 - Anamosa to Clinton - 69.4 miles
As much as we didn't want the week to end, 70 miles seemed like a lot for the last day, so we attempted an early start.  Kevin "Captain Dork" Hochstetdler joined up with us for the day.  We were all sad to say goodbye to Christopher "Papa Giorgio" Jamal Rodriguez Enrique Lensing, so we made him promise to come back next year.  He left us in Anamosa to catch up with his ride back to NW Iowa, while we started off on our last 70 miles.


Hale Tap & Supper Club was our last Dawghouse.  We caught up to Team Draught there for one last Bloody Mary together.  The rest of the day was stop and go, stopping in nearly every town to draw it out a bit.  The "10 Miles to Go" sign marked the beginning of my tears (I'm always a sap the last day) that lasted on and off the rest of the way in, replaced by laughter when we spotted Captain Dork, Bud Light in hand and a cop 10 feet away, waiting for us on a corner just blocks from the river.  We were late enough that there was no line for the dip, and early enough to get home before dark.  Sigh.  It goes so fast, but it'll be here again before you know it.


Before ending, I want to extend sincerest thanks to our Dawghouses for supporting us;  our hosts, Mike & Emily and Harold & Marcia, for their Iowa hospitality; my brothers for lending their house; and Teams Draught, Gnarley, Spin, the Regulators, Good Beer and all the others we had fun with along the way.  Thank you also to State & Local law enforcement who looked after us throughout the week, and the vendors who kept us nourished and hydrated along the route.  We're proud to share this great Iowa event with y'all, and proud to be Iowans and a part of this "nothing like it anywhere" experience.  See you next year!
Posted by Hair of the Dawg at 3:59 PM No comments:

Hair of the Dawg