skip to main | skip to sidebar

A Lesson from a Friend

On July 17, 2009, we lost one of our best friends and fans.  We pay tribute to him here and will every year on this date. 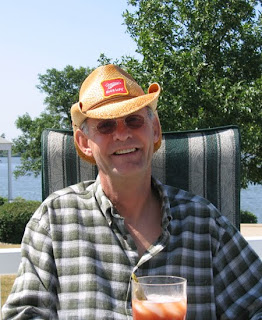 Live well. Laugh often. Love much. A phrase so often used on wall hangings, embroidered on pillows or forwarded in pass-along e-mails it’s become a bit hackneyed...but one never better exemplified than by the subject of our first Dawg Blawg.

We met our friend Doug and his wife when we were running a restaurant in Okoboji, a lake resort town in Northwest Iowa, where they had a vacation home. As often as we were able, we spent time with Doug and Barb...bicycling, hot-air ballooning, engaging in water combat with our restaurant staff, or just enjoying each other’s company over a cold beer or two...and ALWAYS laughing.
At the end of that year, we moved to the opposite corner of the state, and grew inexcusably out of touch with our friends. A few years later, we were invited back to Okoboji for a wedding, so we called Doug and Barb to let them know. They immediately cancelled their own plans to attend a wedding and welcomed us to their lake home. When we pulled in, they met us in the driveway, Doug in his trademark Hawaiian shirt and easy, wide grin and Barb with her infectious laughter and huge hugs. Time had stood still, and over a martini we picked up our conversation...and laughter, right where we had left off. They crashed the wedding with us.
That weekend, Barb and Doug introduced us to ‘The ‘Hood,’ a group of neighbors and friends who share the same spirit and philosophy of life...and laughter...and love, who soon became our friends, too. We had so much fun with the ‘Hood we began making trips to the Lake almost quarterly, for Winter Games, an annual bike ride, weddings and wedding showers, or whenever we just needed a dose of the ‘Hood.
One weekend I made my Bloody Mary mix and the ‘Hood loved it. Mark threw down the gauntlet and challenged my mix to a taste-off against his. As difficult as it was to admit, his won. Hands down. Doug, always my champion, told me mine was just as good, but I suspect he was just trying to make me feel better. After that, Mark was not allowed to come to the ‘Hood without his mix. Thus was born our test market. The ‘Hood encouraged Mark to pursue his dream to sell his mix (Doug the loudest cheerleader of them all), so he began to look into it.
Last year we made our annual trip up for Winter Games, but missed Doug, who had stayed home because of back pain that had been nagging him for months. A few weeks later, when the pain had still not subsided, he had an MRI and we all prayed that he wouldn’t have to have back surgery. If only. On Friday the 13th, Barb called with the diagnosis...metastatic bone cancer, primary site unknown. Doug fought it like the true Marine he was, never willing to give up and never letting it crush his spirit or his faith. When Doug lost his battle barely 5 months after the diagnosis and a few weeks after his 61stbirthday, it was then that I realized what a mighty disease cancer is, to take the life out of someone like Doug.
When Doug came to the realization that the disease was tougher than he, he admonished us all to live for him. Maybe what he (and we) didn’t realize was that all along he had been teaching us to live like him...always game for mischief and fun, with a childlike joy and open mind, a kind word and a ready smile, laughter every day, and heart and arms wide open. So threadbare as the phrase may be, we pledge to live well, laugh often (though sometimes through our tears) and love much...for Doug, for Barb, for the ‘Hood, and for ourselves. We hope you will too.
Cheers.

Hair of the Dawg